In '44 the ten man crew # 7347 had finished our flight training at Dyersburg A A F Base TN. and was schedule for overseas duty. We were posted to pick up a new B- 17-G at Lincoln, Nebraska and deliver it to Air Craft Command in Foggia , Italy.

We had trained well, and had come in second on overall crew proficiency contest from our training group, so the Anny Air Force had no qualms about getting us into action as soon as possible come hell or high water.. After some time in getting supplied and checking out our new plane, off we went to Bangor, Maine which was our schedule first stop. Since the Radio man was from Binghamton, N. Y. our pilot came up with a supposed plane problem that forced us to land at one of the military air bases in that area. The rest of the crew went off to meet the family of the radio man and leaving me to provide guard duty over the plane. They all seemed to have a good time, and so many years had passed, I don't recall the details.. At Bangor at our over night stay, they were having a gala N. C. O. party, so with a little conniving, we outfitted our officers with some of our excess clothing, and the ten of us went off to enjoy the party. These were the most ill fitted men there, since the pilot was in my clothing, and I, as the smallest crew man being the ball turret gunner had nothing else to offer. We all had a good time, but as I recall, there were few single ladies to dance with, but lots of beer and alcohol.

Next over night stop, was Gander Field, Newfoundland. From there we went on to the Azores Islands. Coming in for our landing we noticed a beached freighter and Lo and Behold we found out that it was loaded with Portuguese Five Star Brandy, and the local government had put it on the market. What a stroke of luck! We were able to buy two cases with our 2nd place prize money, so we were feeling pretty good the way things were going so far. My potion of the booze was two bottles, and I had made an agreement with myself that one of the bottles would be opened up at the conclusion of my tour. I did take a few swigs out of the other, but how well the balance worked out.

Next stop was Marrakesh, French Morocco, at that point we took on a load of armor for our machine guns, and then to Tunis, and then to Foggia, Italy where our spanking new plane was taken away from us. We were assigned to the 353rd Bomb Sq. and they told us we would get just as good a plane at Lucera, so off we went.! Soon the big day came for us to see our assigned plane at its revetment. What's This!!- It had a name, it had patches all over it, and when we looked at it head on , the right wing looked 10 inches lower than the left wing. Her name was the "Virginia Gentleman". None of us were from Virginia, the painting on the nose of the plane showed a tipsy southern colonel leaning. with one hand on a cane, and holding a mint julep in the other hand. That's it, we decided, we'll take it as is since, they might give us a worse one. if we dared complain. 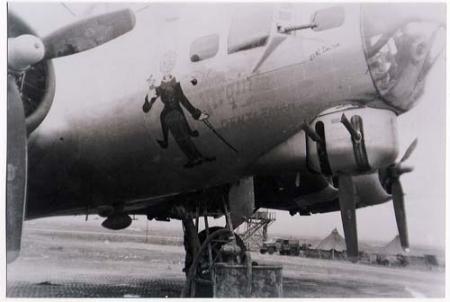 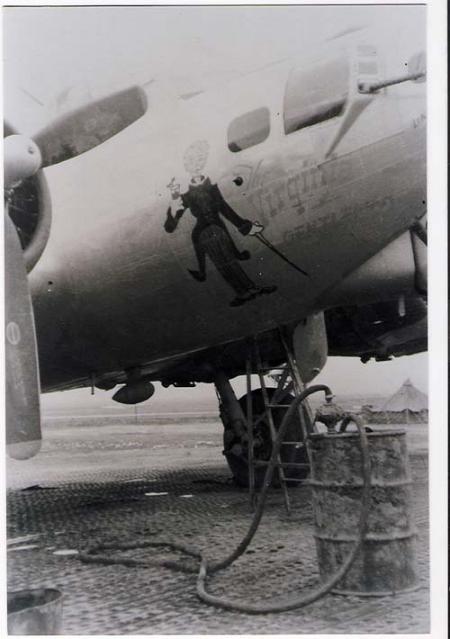 I flew twenty nine missions, mostly on her, sometimes on other ships with other crews or when she was laid up. On one occasion we survived an " 88 " right through the right wing and the projectile kept right on going. The mission we were on was at 26,000 feet. The "88" came through next to the # 4 out board engine nacelle. Talk about some scared air men, we scored about a plus ten. and then some, since the plane wing kicked up about a 45 degree angle. What was strange was the upper turret gunner or myself, the lower ball could not see any damage. The nacelle shrouded the pieces of metal sticking up from the wing.

After we landed, we all rushed to take a look- and probably thought this was the right time to turn in our resignations.

As compensations, we crewmen got an extra shot of bourbon when we reported to H.Q. and related the incident. I never checked but, probably the right wing was back in alignment with the left wing again.

There were a lot of other incidents that happened on other missions. No need to tell we were all scared 98% of the time We had the honor of flying the " Virginia Gentlemen" back home to the States. The Saga of our return trip would not be complete without at least one or two more tale of a remarkable plane. The flight plan on the return trip was to reverse our destinations going back, except we flew direct from Lucere to Marrakesh. The next leg was to the Azores. We had just settled into the journey about two hours over the Atlantic, when bang, the abandoned ship bell rang.. Whats this !, another Disaster about to happen? Luckily no , one of our engines blew a oil line, since its no problem flying a fortress with three we headed back to Marrakesh. It took a few days to get the engine replaced, but what it also did, was to extend our flying time into the next month so we all ended up with the additional month's flight pay. The next problem occurred on our new navigator heading for Gander Field, New Foundland. What had happened our excellent Navigator had completed his thirty five missions some months previously, and had gone back to the States for leave and reassignment.

In his place ,we got a wacky flack happy one. I was up in the front of the plane and saw the pilot pull his weapon{ he was the only one allowed to take his" 45" on board] cursing the navigator to get the right heading. The navigator had plotted our heading to aim us for a direct flight to the North Pole. The pilot instead honed in on the Gander Field radio beacon and we corrected the heading for the safe landing.

The final destination was to Bradley Field, Winsdor Locks, Conn. ! !We disembarked and and took one last look at her. You did the Air Force proud. "Virginia Gentleman" 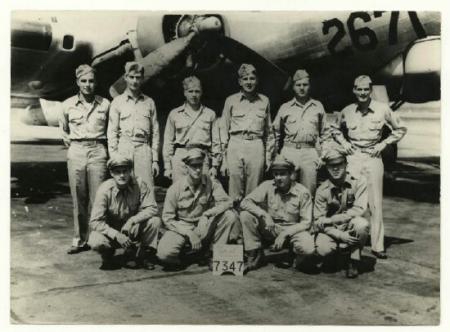 The following information on Walter Sabo is gathered and extracted from military records. We have many documents and copies of documents, including military award documents. It is from these documents that we have found this information on S/Sgt. Sabo. These serviceman's records are nowhere near complete and we are always looking for more material. If you can help add to Walter Sabo's military record please contact us.

Please contact us with any biographical data, pictures or other information regarding the service and life of Walter Sabo.