The "Rigor Mortis", Tail Number 25233 flew 113 missions in WWII. Following is a list of 51 of her missions as described by T/Sgt. J.J. Farrell, the top turret gunner and aerial engineer. It was T/Sgt. Farrell's job to arm the bombs before they were dropped and he kept a bomb tag from each mission.

January 2, 1943
Our first combat mission in North Africa. Bombed Tunis, heavy flak, about 20 F.W 190's attacked us, 6 shot down. Our tail gunner was hit with flak and sent to hospital.

February 4th, 1943
14th combat mission. Bombed airport at Gabies, heavy flak and fighters, we lost a ship from our outfit.

February 18th, 1943
17th combat mission. Bombed Gabies but was snowed in, light flak and no fighters.

April 4th, 1943
28th Bombing Raid, went to Naples, Italy, first raid the fortresses have made into, flak was deadly as to altitude & deflection, few fighters.

April 5th, 1943
29th Bomb mission. Bombed Palermo in Sicily, flak was as bad as yesterday only four fighters though.

May 6th, 1943
34th Raid. Bombed a convoy other side of Sicily. Blew an ammunition ship sky high, sank in about a minute, only four fighters.

May 20th, 1943
38th mission. Bombed airfield at Grossete north of Rome. No flak at all hardly and no fighters. Wrecked the field.

May 24th, 1943
39th Raid. Bombed docks in Taraneuer, Sardinia, just across the straits from Corsica. Light flak and no fighters.

May 28th, 1943
41st Raid. Went to Leghorn, north of Rome, farthest we've gone yet. Blew up oil refinery and docks, light flak and only about five fighters.

May 30th, 1943
42nd Raid. Went to Naples again, bombed aircraft factory, airport and docks, really blew things up. Flak was heavier than hell, but inaccurate and about 30 fighters came up.

June 25th, 1943
49th mission. Raided Messina again. Flak was terribly heavy, attacked by a dozen fighters twice on the way back, they dropped bombs on us.

June 30th, 1943
51st mission. Today went to Palermo, no flak and no fighters, finished up, now might get sent home. 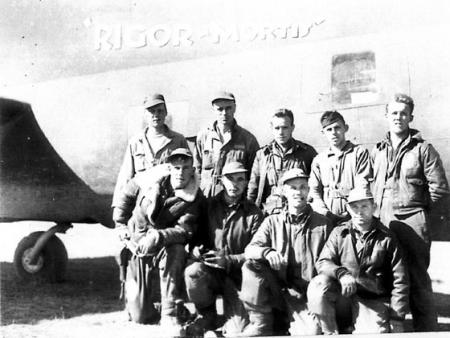 You can see more about the Rigor Mortis and her crew at the B17RigorMortis.com website.